Myrholm is an artificial island, which is located in the harbor together with nine different newly built neighbors. The landscape is designed to fit wind and salt water, and when Myrholm is finished, it becomes an island, with plants that you also find in the Danish archipelago. Myrholm is probably an artificial island, but soon it will give us nature experiences that are genuine and versatile:

Plants for a salt harbor

White willow, a light-open tree with a gray-green bark and silvery leaves. Scots pine, with its characteristic dark green needles and the slightly reddish stem that illuminates the landscape. Both of these trees will thrive in Myrholm’s windswept and salty climate. Ornamental grasses such as Elephant Grass and Blue-green moor grass flourishes nicely, in reddish-brown and golden colors over late summer and early autumn, and box leaved honeysuckle – an evergreen shrub with small yellow flowers – blend in with the sea air with the scent of lemon and honeysuckle oil. All the plants must together shield against the wind and form a natural transition between the buildings and the canals.Myrholm’s signature tree is a Scots pine that can handle the salty environment. The tree is evergreen and is found in several places on the island. But there is also diversity to find, because Myrholm has four public promenades, and each promenade has its own plants, living and daylight conditions:

The north-facing promenade is a one-way to minimize traffic. Here you can find hornbeam in a bed of blue-green moor. These plants do well in the shade and can nicely downscale the jump between the tallest houses and the flat stretched water. Along the buildings runs a wide bed with ornamental grasses, which gives distance to the promenade and privacy to the studios. The grasses work fine with their winter stands in the dark months. The sidewalk is a Copenhagen pavement as you know it from older parts of the city. At each entrance there are benches and wintercreepers – and the sound of the wave swirl

The east-facing promenade connects the pedestrians from Myrholm to the neighboring islands. Along the promenade there are green hills in the pavement. Hills with lyme grass and wind-tolerant trees. The trees along the promenade – the scots pine and the May flourishing European bird cherry – will highlight the hills and create shelter. The pavement consists of concrete stones in gray tones that are divided into a pattern of black granite stones. After sunset, the light comes from high masts along the promenade and small lamps in the beds.

The south-facing promenade is covered with the same stones as the east-facing promenade, but in a new pattern across the promenade. Circular beds reduce the speed of cars and bicycles and create variation with its mixed planting of colorful butterfly bushes, juicy green Japanese forest grass and red-fruited rowan trees.

The west-facing promenade connects the motorists on Myrholm with Copenhagen. Between the bicycle and car parks are bushes of dwarf pines and broadleaf autumn olive in a bottom of Sea thrift and Spanish bellflower. On the opposite side of the promenade, in a strip of gravel, stands a one-sided tree-lined avenue flanking the main canal, where floating furniture in concrete invites everyone for a break before the trip goes home to the apartment on Myrholm or back to Copenhagen. 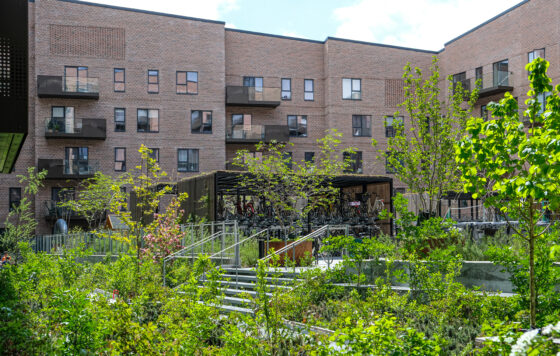 Lavetten: Where the rainwater ends

Lyngholm: Wave traces in the sand 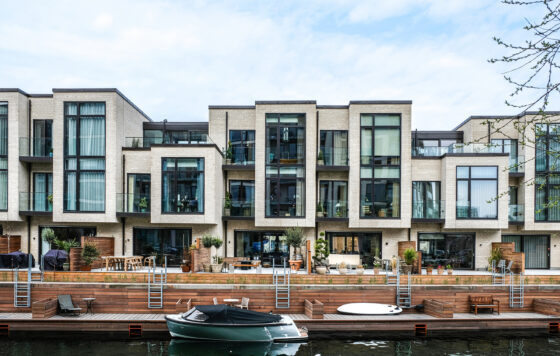 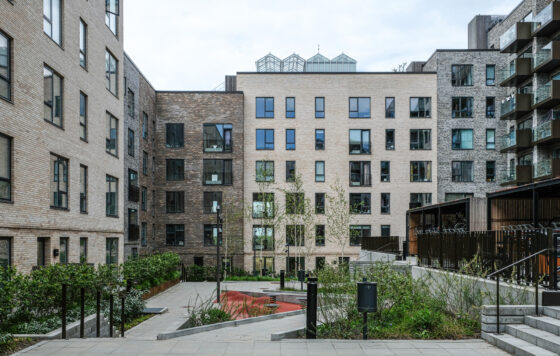